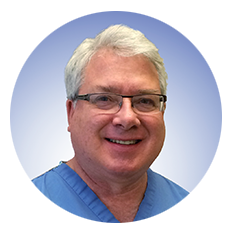 Dr. Lawrence Presant is a certified diplomate of the American Board of Venous & Lymphatic Medicine. Dr. Presant is quick to share that the passion of his surgical career is phlebology, the diagnosis and treatment of vein disorders. He brings with him many years of experience as a vein surgeon specialist and offers a full range of treatments and diagnostic testing to correct painful and unsightly vein disorders. He has received training from several world leaders in phlebology and has been a speaker at national meetings for the American College of Osteopathic Surgeons and the American Vein and Lymphatic Society. Dr. Presant also trains other physicians, surgeons, and medical students in his many areas of expertise. Nationwide, Lawrence Presant is recognized as a leader in the treatment of vein disorders.

Dr. Presant completed his undergraduate training at Dartmouth College with a major in biology and a minor in psychology. He completed medical school at Kansas City University of Medicine and Bioscience in 1980. His postgraduate medical education included a rotating internship at Brentwood Hospital in Cleveland, Ohio, during which he received training at the Cleveland Clinic in rheumatology. Dr. Presant completed a four year general surgery residency at Richmond Heights General Hospital. During this time he had training in orthopedic surgery at Cuyahoga Falls General Hospital and cardiovascular surgery training at St. Vincent Charity Hospital in Cleveland. Dr. Presant passed both his written and oral board certification examinations in surgery and was inducted into the American College of Osteopathic Surgeons in 1986. He also passed his written and oral board certification examinations in family practice medicine.

Dr. Presant practiced in San Diego, California from 1986 until 1993. He served as president of the San Diego Osteopathic Medical Association in 1992-1993. He accepted a medical director position in managed care medicine in Southern Florida in 1993, however found it to be professionally unsatisfying. During this time he founded South Florida Vein Specialists. He was one of the first vein specialists to perform endovenous laser vein treatment in 2000, and brought this new procedure to Arizona in 2001. He has established a reputation for his high quality work in vein treatment.

Dr. Presant also has a special interest in medical aesthetics which he feels has an additive effect on patients quality of life. He sought expert level training from one of the leading authorities on Botox and fillers and he developed natural skin care products for adults and children. Dr. Presant is a member of the American Vein And Lymphatic Society, American Venous Forum, Arizona Osteopathic Medical Association, and American Osteopathic Association.

Dr. Presant is married and has three children. He enjoys weightlifting, music, and is an amateur magician.